When I wrote about my ‘ratbat’ encounter from my last trip to Jamaica, Bonnie wondered about the rest of my time in the big, empty house on the beach.  Well, there’s maybe a lot to tell, but I’m going to get the BIG story out of the way first.

As I said with the bat story, I thought that was going to be my big event of the trip, the story I would be telling everyone when I got home.  But then that story and everything else was eclipsed by the arrival of Dean, a Category 4 hurricane.  I have to say here that yes, I could have left before Dean landed.  Why did I stay in the face of a storm of that magnitude?  Well, the word I was getting was that a) it would pass too far out to sea to be a problem and b) it would come after my scheduled departure day.  And I liked the sound of those things.  Both meant not cutting my holiday short, and that made them sound even better.

By the time it was clear that the storm was as big as it was and that it was heading pretty much right for the tiny bit of coast where I was staying, it was too late to leave.  Flights were canceled and it was time to figure out how to ‘shelter in place,’ as they say.  I had offers to stay with Jenna, to stay with either of two lovely ex-pat ladies who live there, to stay with AC … I turned them all down, thinking first that my big house was sturdy and safe (it had withstood Ivan, after all, a Category 5 storm).  I was also thinking about my claustrophobia, and how insane I would be boarded up in a small house with several other people all day and all night.  That sounded like a definite “no” to me.

So I stayed … and had one of the scariest times of my life … and learned an important thing about myself: that I can be utterly terrified and still be level-headed enough to be resourceful, to come up with a new plan (and a new plan, and a new plan) when the current plan proves unworkable.  It’s a good thing to know, but there must be less frightening ways to learn it! 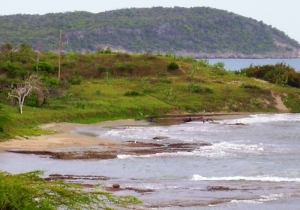 So this is the morning of the hurricane.  It looks calm and normal … but the water is already much higher than it usually is, already reaching back to the base of the hill.   I was up on the roof taking this picture, watching for signs of the storm.  It was windy, but not too bad.  Jenna came by to offer me one more chance to ride out the storm at her house, but I turned her down.

This is the sea wall separating the ‘cottage’ from the beach.  It has a little white picket gate, but the owner sent some men over to board up the house to keep the windows from blowing in and all.  And when they came, they took the gate off so that it wouldn’t get ripped off by the storm.  I took this picture as a ‘before’ picture.  I was curious to see where that fallen tree would be after the storm.  It was a huge and hugely heavy thing, and it had already begun shifting position and the water was only a little rough.

Still on the roof, and everything was still looking normal, but it had started to get cloudy and the wind was much stronger.  Then I saw  the bands of rain approaching from the east (the background of the photo).  This was when Jenna headed home to finish her preparations and close herself inside with her family.   I, meanwhile, was still feeling that my decision to stay alone was a good one.  The wind was getting stronger.  I wanted to take pictures from the north of the house, but the wind was too strong for me to get a steady shot.

These next few pictures give you an idea of the sea getting rougher and of the wind getting stronger.  The wind was coming from the north, so it was pushing hard against the waves, which was cool to look at, but was also a little worrying.  The men who had boarded up the house had only boarded up the south and east sides … because, they said, storms always come from the southeast.  But the wind was making me wonder if they’d made a mistake.  They had made a mistake, but that wouldn’t become totally clear until that night. 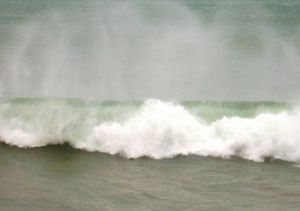 After these pictures I moved inside because the wind was pushing me off the balcony!  From inside I saw zinc sheeting get tossed around like pieces of paper.  And I heard the wind make sounds I never knew it could: a low crying, a shrill screaming, a heavy freight train rumble.

I had the radio — Power 106 and Irie FM — and I had my cell phone.  For a while, anyway.  I made like a Millionaire contested and used the phone-a-friend lifeline.  I called the two people I knew in Florida who had some recent experience with hurricanes.  (Yes, one of them was the Morphine Man … and yes, I probably shouldn’t have called him.  But, even though by that time we were already not speaking to one another, I knew that he would talk to me.  I was getting more and more scared and I knew he would help make sure I had taken all possible precautions.  And he did.  My other Florida lifeline was Nurse J, a lovely-lovely woman who’d stayed at the house for about a week and who had gone home the day before the airport shut down)  Both gave the same suggestions about how to construct a safe space in the room in case the windows blew in, or the roof was ripped off, or in case any other terrifying possibilities became realities.

Not long after my conversation with the Morphine Man, the power was cut, and then the phones went out.  So when it got dark it was me and Dean.

Rain started coming in from the ceiling, the windows, under the doors … and then the wind broke the front doors  — the north-facing house doors that hadn’t been boarded up or nailed shut or anything clever and preparatory like that.  I did a quick GirlGriot-as-MacGyver turn and rigged a way to get them closed, but it didn’t hold long.  I held them closed for a while, but that wasn’t a good plan: standing all night holding two big doors against 145mph wind?  No.  So I accepted that the storm owned the front of the house.  I moved the furniture to the south side of the house, tried to make the wind’s path to the back of the house clear so that it wouldn’t smash any of the furniture into the big sliding glass doors opposite the blown open front doors.  Then I retreated to my bedroom … where only the flimsy interior door stood between me and Dean.

I followed the instructions from Florida and made a safe corner and rode out the storm there, singing to calm my nerves, keeping my eye on the little votive candle that Nurse J had left behind.  It had a little label that said ‘Hope’ … and I decided it had been left there just for me, decided that if it kept burning, I’d be ok.

Morning finally came, and the storm moved on.  I was safe … the candle flared, guttered and went out.

Here’s some of the misguided storm prep on the house (and you can see that the house is much too big to be considered a ‘cottage’).  The boards were put up so well … if only they’d been put up on the north and west sides of the house, too!  Oh well.  Maybe they’ll know for next time.

Remember the tree that was in front of the gate? 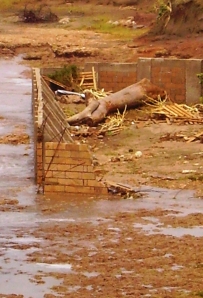 Where it smashed through their sea wall and made itself right at home.

I have a lot of ‘aftermath’ images … maybe next time.

(My thoughts go out to all in the Caymans, in Cuba, in the Bahamas who were just in the path of Paloma.)

is hosted by Stacey and Ruth at Two Writing Teachers.

3 thoughts on “And then there was Dean …”