I am away at a conference. Mid day yesterday I stood outside the hotel waiting for my lunch companions. A patrol car pulled up, and two women jumped out along with the officer. The women were conference goers, too. I knew from their bright, new conference totes. They posed in front of the cruiser, and the officer took their picture. The hotel’s shuttle driver came out, saw them, and asked, all smiles and laughter, if they’d been arrested. More smiles and laughter as they explained how they’d gotten lost and the officer had found them on some who-knows-where road and brought them back safe and sound. He was, apparently, “just so nice, sweet as he could be.” Everyone laughed some more. The officer posed for a selfie with the ladies and left. The driver waved and left. The ladies went into the hotel.

But here is also where I say that, when I imagined myself lost on some who-knows-where road in this town, when I imagined a police car pulling up to me as I tried to find my way back to my hotel, I could only imagine Marlene Pinnock, could only imagine a scary, violent plot line for my story. No smiles and laughter, no poses in front of the cruiser, no selfies with the hero officer.

But how many times, just in 2015 alone, has a should-have-been-harmless encounter between a police officer and a Black person ended with that Black person’s death?

And that’s what I thought about as I watched that scene play out. I thought it when the officer stepped out of the car and gave me a careful once-over before turning to smile at his smiling passengers. I thought it as the women passed me to enter the hotel and didn’t respond to my smile and nod but shifted away slightly and took themselves inside. I thought it as the officer drove off, giving me another long look as he passed.

I was once rescued from a broken elevator by two police officers. This was back in the 80s, back in the bad old days of my life in an apartment building that attracted a lot of police attention. Those officers were surely in the building because of the crack factory in 1F and just happened to hear my cries from down the shaft. I was so happy to hear their voices as they talked crazy-claustrophobic me back to calm, so happy to see them when they finally got me free. There were smiles and even some laughter.

There are a lot of things I think of when I think of white privilege. A LOT of things. Yesterday it just slapped me hard, the freedom those women have to feel safe and at ease with that officer because they know he’s going to serve and protect them, and it would never occur to them that he wouldn’t because they are good people, nice people, law-abiding people, and of course he would drive them back to their hotel.

And I am a good person, a nice person, a law-abiding person. And that officer might have driven me back to my hotel, too, even without my shiny conference tote bag marking me as a sanctioned stranger to his town. He might have. But I no longer have the privilege of believing that without a second thought, of being able to take my safety with him for granted.

It’s probably a given that I would return to this blog on a Slice of Life Tuesday.
Please check out the slices other folks are serving up over at Two Writing Teachers! 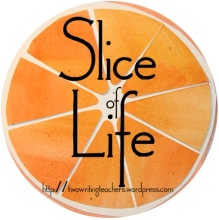 * I know it should be be “réalisation,” but I’ve always just liked “rendu compte” better. And, too, there’s no excuse for making the title French. But that’s how it came into my head when I finished writing and needed a title. Which is random and strange, but I generally like random and strange, so I went with it. (Désole de ne pas désole.)