Or … you know … somewhere that put it in the sun’s path.

What were you doing during The Great American Solar Eclipse (and were you as weirded out by the crazy branding of this natural phenomenon as I was)? I don’t live anywhere near the fabulously-named Path of Totality, but we had good viewing all the same.

I was at work yesterday, but I was totally prepared to ditch obligations and get into a position to experience this moon shadow business. (Oh, and that should have been my title, right? “I’m being followed by a moon shadow …” But “Age of Aquarius” seems more fitting for all the brotherly love that was going on during the viewing party yesterday, so I’m sticking with what I’ve got. Also, I couldn’t stop thinking about A Connecticut Yankee in King Arthur’s Court. Am I the only one?)

So at about 2:10, my coworker and I led the exodus. We took advantage of our privilege-carrying office ID cards and got uncrowded viewing space inside the gated courtyard across the street. I didn’t have glasses, but the team we share space with had some of those Warby Parker viewing boxes, and they were up for sharing. I was alternatively prepared, however. I’d gone online and determined that I could turn my back to the sun and use the selfie mode on my phone and get some pics that way. And that worked … even though I didn’t realize it had worked until I was home last night. But folks in the courtyard were super generous with sharing their glasses, so I got to see plenty, and I took some pics that way, too. 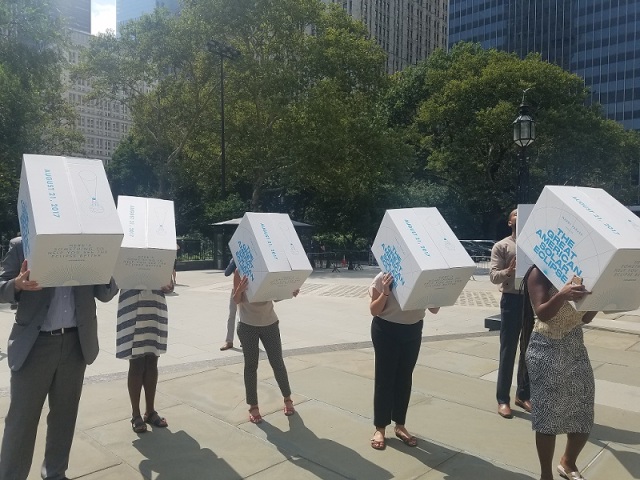 Here are some of my coworkers in their Warby Parker boxes. I think part of the point of these boxes was really just to make folks look as silly as possible! I couldn’t love this picture more, though. 🙂 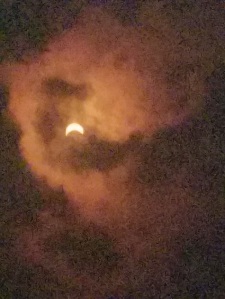 I took this by putting some borrowed eclipse glasses over my phone’s camera lens and zooming as far in as I could. Good on my Galaxy 7 for getting this shot for me! 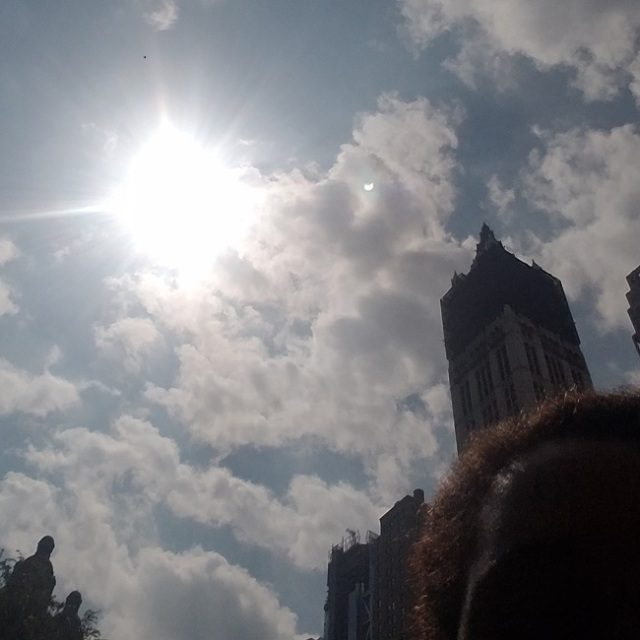 And now it’s #eclipseselfie time! I couldn’t see a thing when I put the phone in selfie mode, so I figured my internet research was a fail. I took a handful of pics anyway, just to show how much nothing I could see. Then I got home and took a closer look and saw that, in every one of the selfies, there was an excellent eclipse reflection captured along with the sun’s glare! 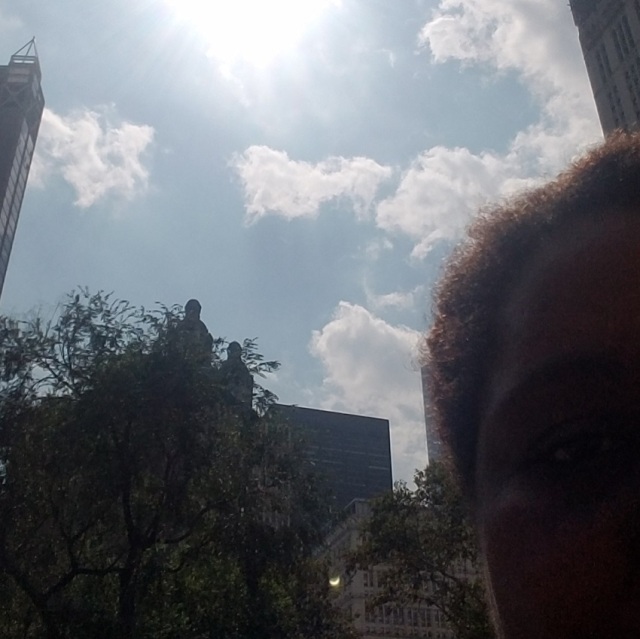 This one’s my favorite. First because I love selfies like this where you can’t really see me because the sun blots me out. But also — because of the angle I’m holding the phone, I guess — the eclipse reflection is so low in the picture and comes out so nicely against the building in the background and right at cheekbone level with me!

What was your eclipse day like? Did you get some of those super fun colander and leaf-shadow pics? (I saw a great one of the eclipse through a vegetable steamer — looked like a mandala!) Hope you were able to get out and enjoy it. We’ll be much closer to the Path of Totality in 2024. Can’t wait! 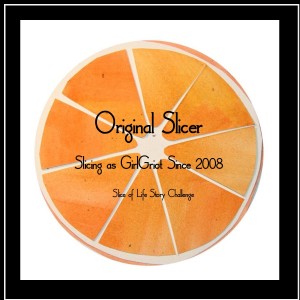 It’s Slice of Life Tuesday! Head on over to Two Writing Teachers to see what the other slicers are up to!

7 thoughts on “Moon in the Seventh House”